Middlesex went out of the English Schools FA Inter County Trophy at the Second Round stage, losing 3 -1 at home to Essex. Middlesex will be disappointed as there were large periods of the game where they dominated play but were unable to capitalise on some excellent goalscoring opportunities that fell their way.

The opening minutes were uneventful before Middlesex’s Shammar Swaby was adjudged to have been just offside when through on goal while Thierry Thomas-Gaye in the Middlesex goal rushed off his goal-line to prevent Essex from having a shot on target.

Essex opened the scoring in the 9th minute when a corner from the left was headed clear and from the resulting corner from the right, the ball was headed home at the far post. The Middlesex response was immediate and within two minutes they were level when Hadi Issa found Swaby outside the Essex penalty area and he took a touch before drilling the ball home.

Within a minute Essex almost regained the lead from a corner that crossed the Middlesex goal-line but none of their players reacted quickly enough to tab the ball in.

A visiting defender was shown a yellow card in the 14th minute for a lunging tackle on Kahlil Francis two yards outside the Essex penalty area and from the resulting free-kick Louie Adedeji saw shot his effort on target palmed away and cleared.
Thomas-Gaye superbly blocked an Essex attempt on goal in the 22nd minute before Chandler Harris was substituted by Rahul Bhundia after picking up a knock after a strong challenge in the middle of the park.

In the 24th minute, Essex regained the lead when a shot from the edge of the Middlesex penalty area took a deflection past the despairing dive of Thomas-Gaye in the Seaxes’ goal. Minutes later Thomas-Gaye prevented Essex from extending their lead by once again rushing off his goal line and making himself big by blocking another attempt on goal.

In the 30th minute, Essex did make it 3 -1 when a cross from the right was headed home unchallenged at the far post.

Middlesex went close to reducing the deficit when Swaby won the ball on the right and passed to Kahlil Francis but he was unable to score from an acute angle before Swaby saw his effort just before half time clear the Essex crossbar.

Issa was replaced by Harris who re-entered the field at the start of the second half and Middlesex started brightly with Shane Kettle seeing his header saved from a Swaby cross from the left by-line.

In the 48th minute, with the game becoming more physical, the referee booked a player from each side after an off-the-ball confrontation. With Middlesex needing an early goal to get back into the game, it was Essex who almost extended their lead in the 50th minute, seeing a looping header go inches wide of the post.

The lively Swaby saw his shot on the half volley palmed away before Francis saw his headed effort on goal go just wide. With Middlesex pressing forward substitution Jojo Thabo was very unlucky to see his effort when through on goal hit the foot of the left-hand post and seeing his follow up effort go wide. Minutes later substitute Dominic D’Souza found Thabo but his effort with just the goalkeeper to beat went wide.

Essex picked up their third yellow card of the game for dissent in the 73rd minute but with Middlesex unable to muster another meaningful attempt on the Essex goal in the final 10 minutes the visitors went through to the next round.

The Seaxes’ final game of 2017 will be away to Kent next Saturday in the SEESFA LC Hill Trophy where they will be looking for another three points. 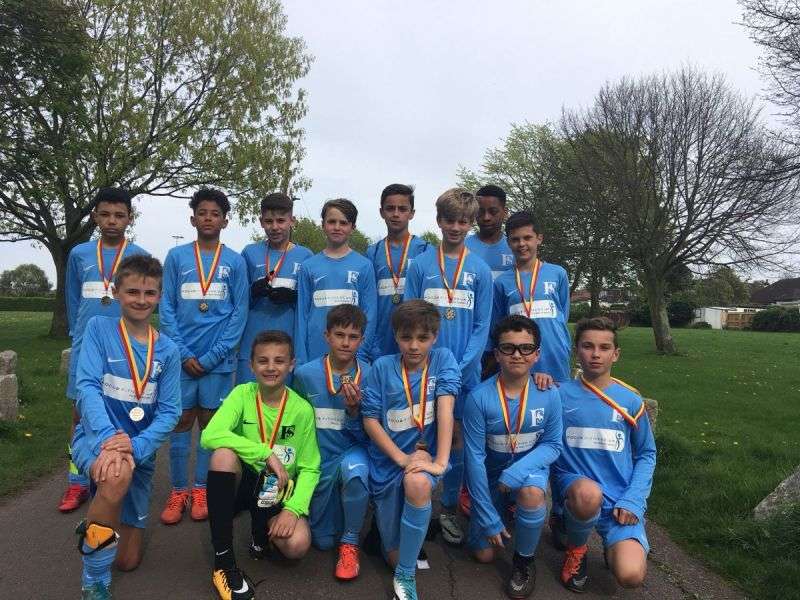 Home » News » U16 Rep. Team knocked out of national cup