The MSFA Competitions for Primary School students are reaching a conclusion, with the 9v9 Alf Gant Cup having reached the semi-final stage and the small-sided tournaments having taken place.

In the Alf Gant Cup, which is the season-long County Cup competition open to all schools in Middlesex, holders Breakspear are in the semi-finals, where they will play Welldon Park Junior School. The other semi-final is between Rhodes Avenue and new entrants St Paul’s Primary School.

This season’s competition has seen an increase in entries and many of the schools who have come into the tournament this season have done extremely well.

The small-sided competitions feed into the English Schools’ FA tournaments, which are themselves a route into the Danone Nations Cup, which features teams from all over the world.

The Inter-School competitions see each district within the Association nominate a school to represent them in the Boys’ and Girls’ tournaments. These are then played in a round-robin, festival format.

Staged at The Hive in Edgware at the end of January, the competitions were hard-fought and keenly contested. The winners of the Boys Competition were Rhodes Avenue, who won all four of their matches, conceding only one goal in the process.

The Girls’ tournament saw four evenly-matched sides in competition, with St Joseph’s Junior School from Wembley eventually taking the honours, having not conceded a goal in their three matches of which they won two and drew the other.

Both Rhodes Avenue and St Joseph’s will advance to regional competitions organised by English Schools’ FA, which will take place in March.

There is also an Inter-District festival for representative squads drawn from each borough which also feeds into ESFA competition. This was held at Capital City Academy on 7th February and was won by the squad from Barnet, who hit ten goals in their three matches. 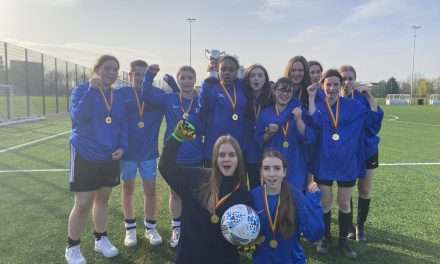