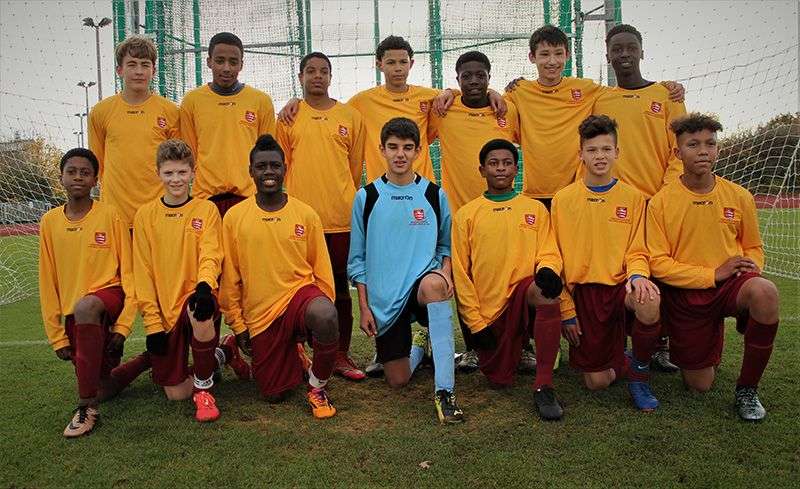 The Middlesex Schools’ FA Under-14 Boys’ squad built on their excellent win away to Sussex on 12th November by following it up with victory over Hampshire in their first home match at Brunel University Sports Park.

Middlesex were clearly spurred on by their victory in their previous game and started the game with a real energy and enthusiasm, quickly gaining possession of the football and controlling the tempo of play. Captain Junior Paiva and Jaden Warner settled in to a partnership in the centre of defence, with Kieron Lake-Bryan and Jiovanni Addo, in the full back positions. This defensive unit played on the front foot from the start, containing Hampshire’s forwards whilst also contributing to attacks, playing out from the back with confidence and purpose. Two particular passes from Warner split the Hampshire defence wide open and had it not been for some great defending, Middlesex may have taken an early lead.

The home side’s defensive strength gave the central midfielders, Tyler Payne, Miles Timthong and Joseph Barnieh time on the ball and they started to dictate play, whilst also breaking up play and preventing Hampshire from getting control of the game. This powerful trio were also bringing wingers Raheem Conte and Liam Lock into the game. Conte and Lock were brave with their dribbles and were attacking the Hampshire full-backs with skill and tenacity, cutting inside and out and putting some wonderful deliveries into the box.

Tristan Goodridge was alone upfront but setting the tone for his team by working hard for the team, stretching the defence  with sharp forward runs and at times dropping deep to link up the play.

However, Middlesex were frequently frustrated around the Hampshire penalty box thanks to some great blocks and tackles from the visitors. Some dangerous balls into the box from both Conte and Lock were causing havoc, but still the Seaxes could not put the ball into the back of the net.

As Middlesex continued to press, Miles Timthong had a magnificent effort from long range, latching on to a cleared corner to strike the ball on the half volley with venom and direction. Timthong’s strike was heading into the bottom corner, only for the Hampshire keeper to make a superb one handed save to keep the game goalless as the first half came to an end.

Isaac Ifewoula, Tarik Gidaree and Freddie Fraser-Grante  all came on at half time as Middlesex shuffled their pack. Starting sharply, Middlesex picked up where they left off and continued to dominate the game. However, as the second half progressed and with Middlesex failing to convert momentum into goals, it was inevitable that Hampshire would get a chance to punish the home side.

Hampshire had been organised and resolute and did create a couple of chances on the break with long balls over the top. The visitors came up against goalkeeper Bikram Khaia who was determined to keep a clean sheet.  Khaia made one top-class save, preventing the ball from rocketing into the top corner and keeping the scoresheet blank.

Twenty minutes into the second half, the hosts’ possession and penetration finally paid off. Middlesex got the ball out wide to Lock, who beat the full back and whipped in a dangerous ball to Payne who burst into the box and slotted a half-volley into the roof of the net. Payne’s composed finish was his first goal for his County.

The goal really settled the game down and Middlesex put together a composed and mature performance to secure the points and move to the top of their group, albeit having played more matches than the other Counties in their section.

Coach Kim James stated after the match:  “It was great to see such a spirited group battle for each other and show a real passion for representing their county. They have won two out of three games and are looking forward to playing Kent next Saturday, where we will look to replicate the same level of discipline and desire and hopefully be a little more clinical in the final third.

“I’d like to give a special mention to our man of the match, Miles Timthong (pictured, below), who was brilliant all game and had it not been for some goal keeping heroics, would’ve capped his terrific performance with a goal.  Congratulations to Raheem Conte,  Jiovanni Addo and Freddie Fraser-Grante on making their county debuts.

“A special mention also to Ibrahim Elhaouari, who just missed out on the squad this week but still came down to support the team. Finally, thanks to Steven Toddington for taking the match day photos.”